Downtown’s ‘Pay It Forward’ program will benefit from the funding

ITHACA SEPT. 27, 2017 — Today, the City of Ithaca and the Downtown Ithaca Alliance (DIA) are receiving a significant monetary grant for one of downtown’s latest initiatives, Pay It Forward, a community partnership program that enables people in need to easily access food, toiletries, and personal supplies at participating downtown shops and restaurants.
Downtown Ithaca will join City of Ithaca Mayor Svante Myrick during a special ceremony on Wednesday, Sept. 27 at 2 p.m. on the Bernie Milton Pavilion stage in Bank Alley on The Commons to receive a $50,000 Outstanding Achievement award from The United States Conference of Mayors’ (USCM) CommunityWINS Program and Wells Fargo, which supports the USCM program. Downtown Ithaca will apply the monetary award to Pay It Forward.
Following the award presentation, light refreshments will be available.
“Pay It Forward is an exciting, novel effort to help those most in need in a way that preserves their dignity. If you are hungry, there will be food. If you need personal items, or batteries, or any other items, you will have immediate access without scrutiny.  We want to help all of our citizens, especially those most vulnerable,” says Mayor Myrick. “Pay It Forward brings together the city, the DIA, caring businesses, nonprofits and community members who agonize over how to give to the people on the street. Now with the Pay It Forward Program, they know their dollars go for the basic needs that people truly must have, but sometimes forego to satisfy their addiction.”
Pay It Forward is managed by the DIA, a not-for-profit community development organization charged with creating and sustaining a vibrant and healthy city center. CommunityWINS funding will help the DIA replenish Pay It Forward funds at the participating businesses and allow the DIA to purchase marketing materials aimed towards downtown workers and visitors. The DIA has already purchased and displayed three money collection kiosks where the public can make personal donations. The three red donation boxes are located downtown on Aurora St., in Home Dairy Alley, and in Bank Alley.  All of the money collected from the donation boxes is used to buy food, sundries, and basic necessity items for Ithaca’s homeless and people in need.

The community can donate to Downtown Ithaca’s Pay It Forward program by placing cash, checks, or coins in the donation boxes. Pay It Forward boxes are located in three spots on the Ithaca Commons.

“We are honored the United Conference of Mayors and Wells Fargo recognizes this special downtown program which serves as an appropriate way to assist individuals who are in need. The $50,000 grant will certainly strengthen Pay It Forward and will greatly benefit those in need who receive items from it,” says DIA Executive Director Gary Ferguson.  The DIA thanks USMC and Wells Fargo for the funding and thanks the City of Ithaca, the downtown Ithaca businesses, and the Ithacash program for participating in and supporting the Pay It Forward program.
The 2017 CommunityWINS award is given to city-based nonprofit organization initiatives and recognizes mayors for exemplary leadership in developing local programs that promote long-term economic prosperity and improve the quality of life for residents in three categories: neighborhood stabilization, economic development, and job creation. The City of Ithaca was one of six cities selected from 245 applicants who were seeking funds.
“Our 2017 CommunityWINS℠ Grant Program gives the Conference an opportunity to showcase positive change happening now in our cities to make a difference in the lives of residents.  We are grateful to Wells Fargo and the Wells Fargo Foundation for their support of the CommunityWINS℠  Program, which also highlights the talent and commitment of mayors and city governments,” says Tom Cochran, CEO and executive director of the U.S. Conference of Mayors.
David Smith, Wells Fargo Home Mortgage consultant for the Ithaca area adds, “Wells Fargo is delighted to collaborate with the U.S. Conference of Mayors to make these grants available for innovative programs such as Pay It Forward that will help provide food, toiletries, and personal supplies for residents here in Ithaca and in our great state of New York. Wells Fargo cares about the communities we serve and the 2017 CommunityWINS grant program is among several economic empowerment efforts we support that are dedicated to building better communities.”
For more information about Pay It Forward, contact the DIA at (607) 277-8679, email info@downtownithaca.com, or visit www.downtownithaca.com. Downtown Ithaca’s initial release regarding its Pay It Forward program is available by clicking here.

About USCM: The U.S. Conference of Mayors is the official nonpartisan organization of cities with populations of 30,000 or more. There are 1,400 such cities in the country today, and each city is represented in the Conference by its chief elected official, the mayor. Find them on facebook.com/usmayors, or follow them on Twitter at twitter.com/usmayors

About Wells Fargo Housing Foundation: Wells Fargo & Company (NYSE: WFC) is a nationwide, diversified, community-based financial services company with $1.8 trillion in assets. Founded in 1852 and headquartered in San Francisco, Wells Fargo provides banking, insurance, investments, mortgage, and consumer and commercial finance through 8,700 locations, 12,800 ATMs, the internet (wellsfargo.com) and mobile banking, and has offices in 36 countries to support customers who conduct business in the global economy. With approximately 265,000 team members, Wells Fargo serves one in three households in the United States. Wells Fargo & Company was ranked No. 30 on Fortune’s 2015 rankings of America’s largest corporations. Wells Fargo’s vision is to satisfy our customers’ financial needs and help them succeed financially. Wells Fargo perspectives are also available at Wells Fargo Blogs and Wells Fargo Stories.

ITHACA JUNE 27, 2017 —  Assisting the homeless and those who are in need is the daily struggle of many cities; however, Downtown Ithaca has developed a compassionate plan called Pay It Forward to help these individuals.

Pay It Forward is a community outreach campaign that allows the public to make a donation that will assist those in need with purchasing a meal or sundries from participating businesses. The public may also donate by making a contribution in one of three red donation boxes. Three boxes are on the Commons. One is Aurora St., the second near Home Dairy Alley and the third in Bank Alley.  All of the money collected from the donation boxes will be used to buy food and basic necessity items for Ithaca’s homeless and people in need. 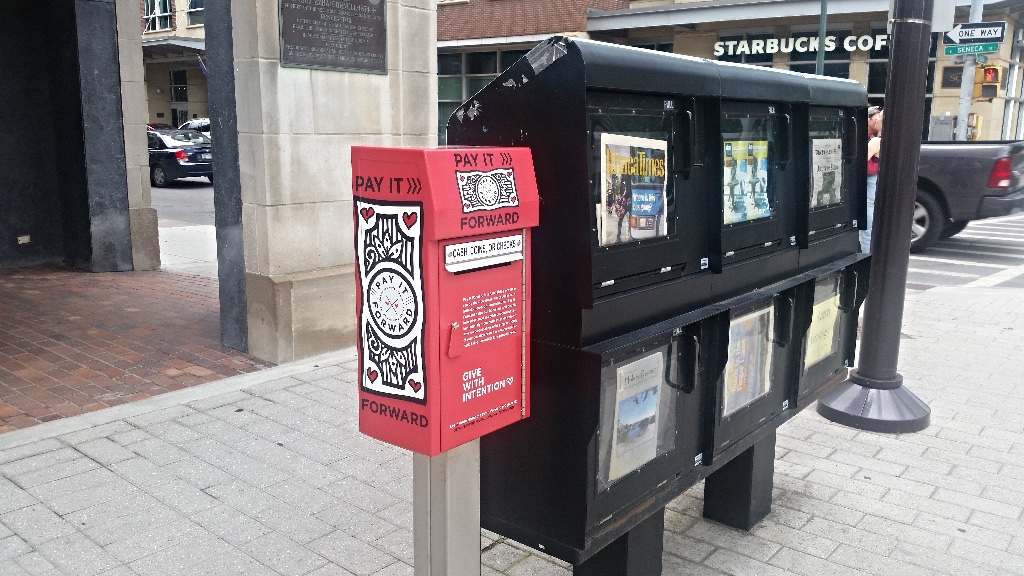 Pay It Forward donation boxes are located at three sites on The Ithaca Commons. Here’s the Bank Alley donation box.

The program is managed by the Downtown Ithaca Alliance (DIA), a not-for-profit community development organization charged with creating and sustaining a vibrant and healthy city center. The DIA, City of Ithaca, Community Outreach Worker Tammy Baker, Center Cafe owner Terry Little, and Ithacash were instrumental in helping this program come to fuition.

“Despite our inventory of nonprofits and support programs, we have not always been able to meet the basic needs of people on the street. Pay It Forward is a creative and engaging way to involve the community in addressing one of our most fundamental and basic issues — providing for people in need. It does not duplicate existing programs or services; it complements current services provided by nonprofits,” Ferguson said.

The DIA encourages the public to consider supporting the Pay It Forward Program by placing a contribution in the donation boxes or paying directly to the participating businesses. The DIA is also working to enroll more businesses in the program.

Currently, Center Cafe inside of Center Ithaca on The Commons, Green Street Pharmacy, and Casablanca Pizzeria are participating in the program. You may have noticed near Center Cafe’s food service window a white board covered with sticky notes dollar amounts on them; that’s Pay It Forward!

How it works is giving citizens may pre-pay for a meal, or donate to the participating business without making a purchase, or they may place a donation in the Pay It Forward boxes. Any amount of money donated to this cause is greatly appreciated.

Again, the program guarantees 100 percent of the money donated will provide the area’s homeless and people in need with meals and sundries such as batteries, toiletries, or a bus pass.

“What I like about the program is that it can show people that even the smallest gesture such as purchasing an extra cup of coffee for someone in need can go a long way. I am also hoping to show other businesses that it doesn’t take a lot of work or even too much planning to help those in need. If you set up a way for people to help others they will,” said The Center Cafe Owner Terry Little.

Green Street Pharmacy owner Nicole Pagano adds, “Pay it forward is a wonderful way for people to give to those in need with the security that the money is going to good use. I have seen many people benefit from this program in many ways: including a bagel or hot bowl of soup when they are hungry, first aid items when they are hurt, and a bus pass when they need a ride home. This is a way for people to ask for and receive help with dignity and respect. No other person in the store knows that the person in line in front of them is a recipient of this program. I went into the pharmacy business to help people, and the Pay it Forward program is just another way to help others in our community.”

A person in need may participate in this program simply by going to one of the participating downtown businesses and pulling from a bulletin a note tag that is redeemable for food and other necessities.

“Pay It Forward is an exciting, novel effort to help those most in need in a way that preserves their dignity. If you are hungry, there will be food. If you need personal items, or batteries, or any other items, you will have immediate access without scrutiny.  We want to help all of our citizens, especially those most vulnerable,” said City of Ithaca Mayor Svante Myrick. “Pay It Forward brings together the city, the DIA, caring businesses, nonprofits and community members who agonize over how to give to the people on the street. Now with the Pay It Forward Program, they know their dollars go for the basic needs that people truly must have, but sometimes forego to satisfy an addiction.”

For the creation of this outstanding community outreach program, The City of Ithaca was the recent recipient of a CommunityWins Outstanding Achievement Grant awarded by the U.S. Conference of Mayors and Wells Fargo. Ithaca was one of six cities to win the grant; 245 cities applied.

The grant funds will be used to augment the program by providing a pool of funds for replenishing Pay It Forward meals and items at the participating businesses and by paying for program marketing materials aimed at Downtown workers and visitors.