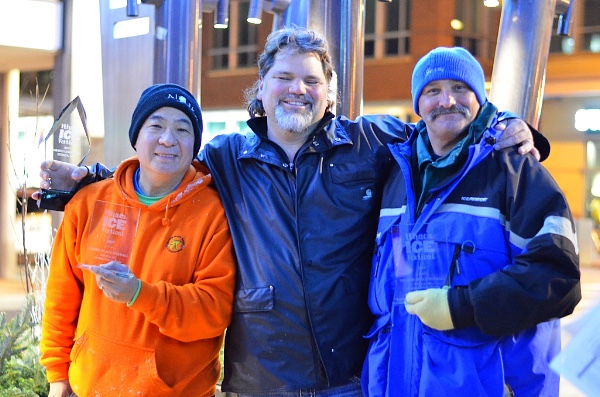 The Ice Fest’s 2017 Championship title was awarded to Aaron Costic (no score given), a 2006 Olympic gold medalist and a past Ice Fest top finisher from Ohio. Costic’s title-winning creation, which he called Wind, was a male’s muscular upper body with fanned out angelic wings on his back. The top three winners were selected by judges from the National Ice Carvers Association.

“We thank the 10 ice carvers who participated in these high stakes contests. They certainly offered our festival guests an incredible show. We also thank the hundreds of individuals who braved the elements to attend this exciting annual affair. We trust that everyone had a wonderful time, and we look forward to seeing you all again next year,” says Gary Ferguson, executive director for the Downtown Ithaca Alliance (DIA), a not-for-profit organization charged with organizing the event.

The DIA’s next major event will be the 19th Annual Chili Cook-Off set for Saturday, Feb. 10. Keep an eye on our Facebook Events Page for information about Chili Cook-Off and Downtown Ithaca’s other events.