Comics for Collectors, Escape Ithaca, and Hotel Ithaca recently announced they are either in the process of adding square footage and/or services to their businesses or have completed those projects.

The largest expansion this fall belongs to Hotel Ithaca, owned and operated by Hart Hotels. Located at 222 S. Cayuga St. across from the Cayuga Street Garage, the hotel has now completed its renovation and rebuilding. A recent ceremony marked the official opening of 90 new upscale rooms in a  new attached five-story building. The ground floor features a conference space and a banquet hall while some of the new guest rooms feature gas fireplaces, balconies, and other similarly cozy amenities. 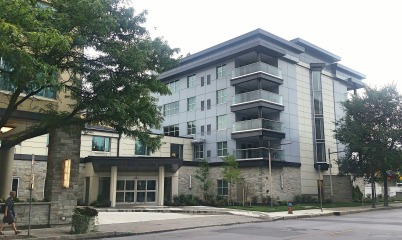 Hotel Ithaca now boasts 171 total rooms, making it Downtown’s largest hotel. The main tower was completely renovated and its 81 rooms were redone last year. The hotel has on-site parking as well as parking in the adjacent Cayuga Garage. It also has an indoor pool and a restaurant (Max’s Classic American Grill).

At its opening ceremony, Hart Hotels President David Hart noted the company’s decision to reinvest in Ithaca, a figure totaling roughly $15 million. Hart thanked his staff and the City for their efforts to make this major renovation project possible.

Downtown’s lone graphic novel shop, Comics for Collectors at 207 N. Aurora St., is also building on its investment in the area. Late last month, Comics owner Tim Gray signed a lease for the neighboring space, formerly Colophon Books, at 205 N. Aurora to make way for more products. Gray says the shop’s space will increase by roughly 700 square feet, doubling the size of the existing establishment.  It’s the first expansion the business has experienced since moving to downtown Ithaca’s North Aurora location in 1994.

Gray says the growth in popularity for graphic novels for young readers and the increasing interest in fantasy-related, roleplaying games, along with the lack of space to provide newer items prompted him to increase the size of his store.

“We carry a lot of fantastic and new graphic novels for younger readers, but it’s hard for customers to see them on the shelves because they are scrunched together with all of the other graphic novels,” Gray says.

Comics for Collectors already sells fantasy-related board games, too, but they occasionally get overshadowed by the incredible selection of graphic novels, or the customers don’t purchase the game because of their lack knowledge about them.

“Often times people come into the store and they’re really interested in the games, but they’re apprehensive to buy them because they don’t know how to play them. With the extra space we’re going to create an area where we can provide customers with brief game demonstrations,” Gray says. 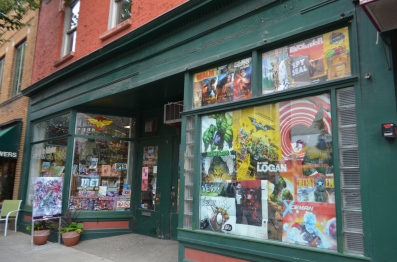 Comics for Collectors leasing neighboring space to add a special section to the store.

Graphic tee shirts (a new item) will also be sold in the additional space, which will be connected to the current shop with an interior portal that is being built later this month, Gray says.

This ambitious project is set to be complete by Wizarding Weekend, Oct. 28.

As for Escape Ithaca, downtown’s only interactive, role-playing adventure, its expansion is complete.  After less than one year in business, Escape Ithaca last month moved from 109 W. State St. (above State Theatre) to a location across the street at 124 W. State, a 1,200-square-foot space nearly double the size of its former site.

“We explored many different options and locations, and after the past year in business, we decided that being in Downtown Ithaca was the only logical choice. We have found Downtown Ithaca to be where the foot traffic is. We see Ithaca residents, tourists, young professionals, and students. We knew that we needed to expand when we had several customers asking for new rooms, larger groups, private parties, etc. It seemed like it was the right thing to do to meet the demand of our customers here in Ithaca,” says Escape Ithaca co-owner Ray Weaver, adding he’s poured thousands of dollars into securing and renovating the new space.

As a result of acquiring additional square footage, Escape Ithaca will soon offer a second escape room, the Sorcerer’s Study, an extremely popular escape room that made its debut last October. Weaver says the new room should be open just in time for Wizarding Weekend. During the Sorcerer’s Study’s initial opening, Escape Ithaca will offer special “Walk-in” rates the entire weekend! 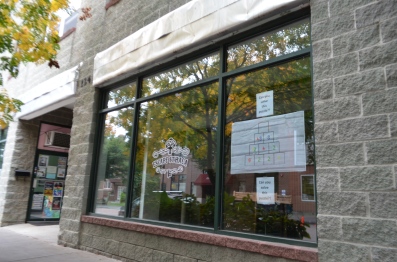 Escape Ithaca moved to 124 W. State St., a space that is double the size of its former location. The additional space will allow the business to add a new interactive, role-playing adventure room.

“As evident by these and other Downtown Ithaca projects, the community is growing, and it will continue to flourish as more residents, students, business professionals, and tourists recognize Downtown Ithaca as a place for fun, popular, and unique experiences and services. We thank these businesses for investing in our community and we congratulate them on their expansions and continued success,” says Gary Ferguson, executive director of the Downtown Ithaca Alliance, a not-for-profit group charged with maintaining and promoting downtown’s thriving business improvement district. 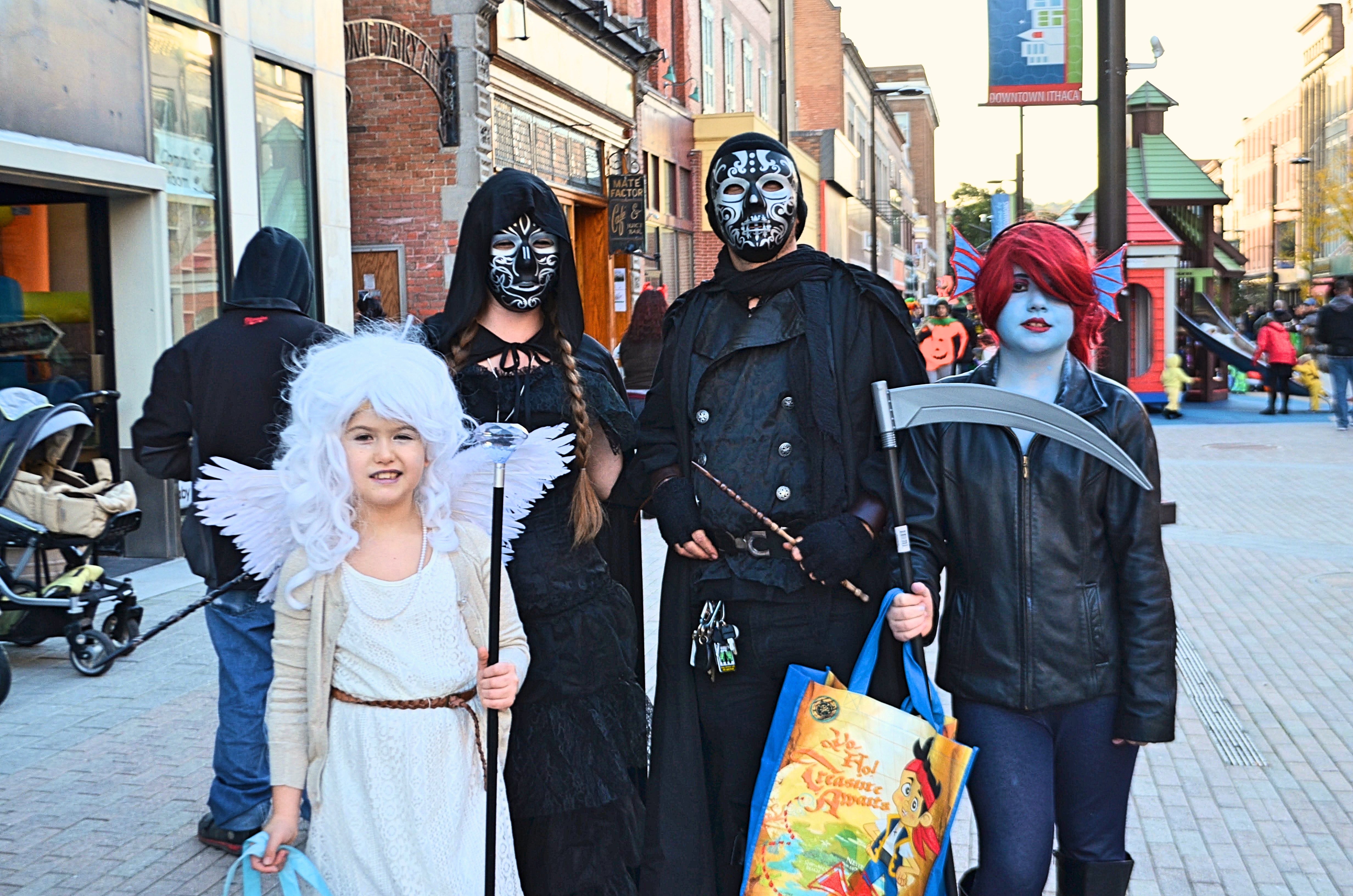 Hundreds of costume wearing youth and their parents are expected to make the trek through Downtown Ithaca next week as part of the community’s annual Halloween in Downtown festivities.

This family-friendly, Halloween-themed celebration, which will include the community’s beloved costume parade and store-to-store Trick-or-Treating, will run from 3:30 to 6 p.m. Friday, Oct. 27. The Downtown Ithaca Alliance (DIA) is teaming up once again with the Greater Ithaca Activities Center (GIAC) to proudly present this annual tradition.

The parade will start at the GIAC, 301 W Court St., Ithaca, at 3:30 p.m and participants will march their way to The Commons, E. State Street, Ithaca. As parade goers make their way to The Commons pedestrian mall they will find dozens of stores participating in all sorts of spooktacular activities (look for a “Trick-or-Treat Here” sign prominently displayed in their storefront window indicating that treats are available). Participating stores are located on the Commons, Aurora Street, East State Street off of the Commons, Gateway Commons, Cayuga Street, Green St. and inside the Dewitt Mall.

“Halloween in Downtown presents a prime opportunity for families to check out downtown’s locally owned and operated boutiques, specialty shops, restaurants, and attractions while collecting candy and other treats at participating locations. The children typically have a great time, and the shopkeepers enjoy seeing all of the trick or treaters,” says Allison Graffin, the DIA’s marketing director.

A complete schedule of activities is available online at http://www.downtownithaca.com.

Halloween in Downtown Ithaca is happening in conjunction with the 3rd Annual Ithaca’s Wizarding Weekend, a very popular event where downtown Ithaca’s streets will be filled magic and whimsy from October 27 through October 31.

As a nonprofit adventure, Ithaca’s Wizarding Weekend is inspired by the Harry Potter series created by J.K. Rowling and provides a magical look into the Ithaca community while simultaneously allowing fans to celebrate.

Wizarding Weekend is organized by Life’s So Sweet Chocolates and Press Bay Alley. More information, including a full schedule of events, can be found at http://www.wizardingweekend.com.

All of these festivities are free admittance for community members of all ages. During Wizarding Weekend, a $5 all-day festival parking fee will be in effect at the Green St., Cayuga St. and Seneca St. garages on Saturday and Sunday.