Posted by downtownalliance on May 2, 2017
Posted in: Parking, Uncategorized. Tagged: #DowntownIthaca, Parking. Leave a comment

ITHACA, MAY 1, 2017 —  A comparative city parking study conducted by the Downtown Ithaca Alliance (DIA) demonstrates that the City of Ithaca charges more for the first two hours of on-street parking than other cities in the region; however, its garage rates and on- street rates are on par with comparable cities across the country. The study also found that comparable cities nationally charged for longer hours, but tended to offset these extra hours with free parking opportunities.

“We wanted to better understand how comparably sized cities with strong retail cores were dealing with parking,” said DIA Executive Director Gary Ferguson.
While reviewing public parking rates, the study found that Ithaca charges the highest rate for two-hour on-street parking in the region. The city charges $1.50 per hour with a two-hour limit.
Regionally, Corning and Geneva offer the lowest on-street parking rates as they don’t charge a fee for the first two hours of parking. Binghamton and Elmira charge the lowest per hour rates — 50 cents per hour with time limits between two (2) to four (4) hours — Auburn charges 75 cents per hour and Syracuse levies $1.25 per hour.

Ithaca’s on-street rates are among the highest nationally, as well.  Of the cities surveyed, only Charlottesville and Chapel Hill have on-street parking rates as high as Ithaca. Charlottesville charges the most at $2 per hour with a two-hour limit and Chapel Hill charges $1.50 an hour which is the same as Ithaca’s rate. Northampton, Tempe, Santa Cruz and Portland’s rates are lower than Ithaca, as they charge $1 per hour. Burlington, Boulder, Eugene and Ann Arbor offer the first two hours of parking for free, with rates ranging from $1.20-$1.60 per hour after that. State College offers the first 30 minutes free and then charges $1 per hour after that.

For garage rates, Ithaca has the third highest rate in the region at $1 per hour and a $7 maximum fee, but knowledgeable residents may buy discounted (65 cents per hour) parking tokens at the Ithaca City Hall. If patrons take advantage of the discounted tokens program, they’ll pay less for garage parking than in most of the cities regionally and nationally.
Regionally, Corning and Elmira offer the lowest short-term garage parking rates.  In Corning’s Gaffer District you can park for the day for $5 or after 1 p.m. pay $3 in the garages. In Elmira, near the First Arena Center, you’ll pay 50 cents for the first two hours and a $5 maximum fee. Syracuse charges $1 to $3 per hour and a $10 maximum, Auburn charges $1.50 for the first hour and $1.25 thereafter with an $8.75 maximum. Geneva doesn’t have parking structures. 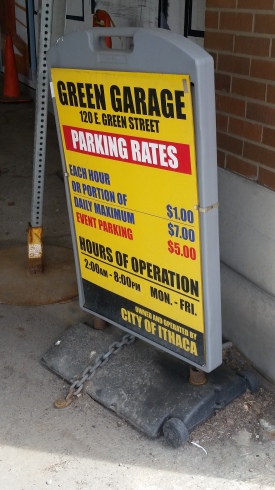 When compared to the national cities, Ithaca’s two-hour rate is in the middle. Charlottesville ($2.50 per hour/$5 for two hours) levies the most followed by Portland ($2.00 hourly/$4 for two hours), Boulder ($1.25 hourly/$2.50 for two hours) and State College and Chapel Hill charge the same rate as Ithaca ($2 for two hours).

Communities that charge less than Ithaca for two hours are Santa Cruz (75 cents per hour/$1.50 for two hours), Eugene, which charges $1 per hour but the first hour for free ($1 for two hours),  Northampton (50 cents for two hours) and Ann Arbor, which don’t charge for the first two hours of parking. Saratoga Springs public garage parking is free all day with time limits.

The DIA found that most of the cities balance their paid parking with free parking periods. The “free” incentives found include free short-term, weekend, evening, and holiday parking, reduced short-term garage parking fees, and parking validation programs. Offering parking incentives ensures that visitors will be able to shop and dine downtown without adding a hefty parking fee to their experience.

“It appears that cities with strong retail have adopted parking policies that help support and bolster their retail business community. While many cities actually charge on Saturdays or into the evenings, they balance these extra hours with free parking that encourages patronage and offsets the sting of charging for longer hours,” Ferguson notes.

Among the national cities reviewed, the best all-day deal is in Saratoga Springs. This city’s parking incentives include free all-day public parking in its garages and free two- and three-hour on-street and parking lot options.
According to Saratoga Chamber of Commerce President Todd Shimkis, the city’s private sector helps the city fund its free parking program.
Saratoga pays for its parking through bonds, an Industrial Development Agency grant, parking ticket revenues and a parking fund that was established with monies collected from the sale of land to build the parking structures. The city’s revenues from these sources have increased since the 1970’s and the city’s Department of Public Works maintains these structures without any dedicated funding, Shimkis said.

The best short-term parking garage deals are in Burlington, VT and Ann Arbor, MI where you can park for free for the first two hours. Northampton, Eugene and Tempe offer the first hour free.
Concerning on-street parking, half of the cities provide free parking for two or three hours during the weekday — and most of the cities, except for Burlington, offer free evening parking.  After 6 p.m. appears to be the average time to end on-street parking enforcement. State College and Tempe were the only cities to start free on-street parking later in the evening, after 10 p.m. Monday through Friday; but, Tempe offers the first two hours of on-street parking for free during the day. Saratoga Springs offers free on-street and garage parking both days but with time limits.

Weekends and holidays are a prime time for shopping and dining. The DIA study found that most of the national comparable cities charged for some portion of weeknights and weekends, but also provided some level of free parking on weekends and weeknights as an offset. In nearly all the cities, parking was free both in the garages and on-street on Sundays and the holidays.

Regionally, nearby cities appear to provide free weekend and weeknight parking. Garage parking is free all day on Saturdays and Sundays in Ithaca, Binghamton, Elmira, Auburn, and Corning. Geneva, which has parking lots and on-street options, provides free parking on Saturday’s after 6 p.m. and free all-day parking on Sunday.

Most of the other cities, except for Charlottesville, offer free on-street parking on government-recognized holidays. Charlottesville, charges for garage parking all day, every day; however, many of its downtown businesses participate in a parking validation program where they will pay for up to two hours of parking for their patrons, so visitors can have their parking fees reduced/eliminated that way. Charlottesville also has designated free on-street parking for three streets adjacent or near to their pedestrian mall.

Nine cities advertise a validated parking program, an incentive where a downtown business pays for their customer’s short-term parking fee or offer a reduced parking rate. Burlington is launching an interim program this year.

To participate in a validation program, the customers have to make a purchase before the business will validate their parking. Merchants in some of the cities provide their patrons with discounted parking vouchers. Validation programs place the cost of parking onto the businesses who buy the tokens or tickets, albeit often at a discount.

The 18 city study has been shared with the City of Ithaca and may provide some insight as local officials ponder changes to City parking policy.
“The study shows that price wise we are at or near the top compared to our region, but in the middle of the pack nationally.It also suggests that parking policy and business support can and perhaps should be intertwined. It is probably not surprising that cities with robust downtown retail also have policies that consumers view as retail-friendly and supportive,” Ferguson said.
A summary chart of the 18 city parking analysis can be found at http://www.downtownithaca.com.
For more information about downtown Ithaca’s parking, including how and where to pay for it, visit www.parkithaca.com. If you have questions or comments, contact the city’s Department of Public Works at (607) 220-3362.