Posted by downtownalliance on August 9, 2016
Posted in: Uncategorized. Leave a comment

Pagano was recently honored as the 2016 recipient of the Cardinal Health Generation RX Champions Award from the Pharmacists Society of the State of New York for her passionate pursuit to make treatments such as Suboxone, Methadone and Naloxone (Narcan) more readily available for opiate drug users in Tompkins County.

“To receive this honor is an incredible feeling. It shows that what 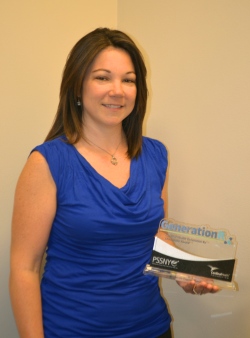 my team and I are doing is impactful and meaningful,” Pagano said.  “Withdrawal is the most agonizing pain a person can experience in their life. Well, we have the treatments available to assist users through it, so we should use them.” .

“Nobody says anything negative about people who use a nicotine patch, or about the diabetic who uses insulin…These treatments are no different from that,” she added.

Pagano fought — and won — when TotalCare elected to remove Suboxone as a preferred product on their formulary for the treatment of opioid dependence. She also worked with Ithaca Mayor Svante Myrick, State Director of the New York Drug Policy Alliance Kassandra Frederique, and many others health and government officials to develop The Ithaca Plan: A Public Health and Safety Approach to Drugs and Drug Policy.

In a few short months since the release of the plan, Tompkins County has increased the number of physicians willing to treat addiction by 50 percent, Pagano noted.

In addition to increasing the availability of treatments, Green Street Pharmacy has teamed up with the Alcohol and Drug Council of Tompkins County, the Cayuga Addiction Recovery Services, and area doctors to create programs that will target drug addiction and tackle the stigma that is attached to opiate users and addicts.

“Ithaca is being very proactive in addressing this issue now that we are aware that addiction is a disease and not just a bad choice,” Pagano said. “We are fortunate to have many resources and a community of open-minded individuals who are willing to explore alternative ways to address opiate addiction.”

Pagano also wants to assist people who may need daily doses of medications other than opiates.

She said she is working with Dr. John Bezirganian, Tompkins County’s Mental Health Center and Alcohol and Drug Council medical director, to introduce PreExposure Prophylaxis (or PrEP) to the area.

Pre-exposure prophylaxis is when people at very high risk for HIV and hepatitis C take HIV medicines daily to lower their chances of getting infected, Pagano explained.

“It’s very common in New York City, and it saves lives,” she said. “Everything I’m doing at the pharmacy is to make life easier for others, make the community a better place, and save lives.”

Pagano has owned Green Street Pharmacy since December 2011. She is the co-owner of Addison’s Apothecary Inc., in Addison, NY. Pagano resides in Steuben County with her husband and three kids. She is a Waterloo, NY native.