Posted by downtownalliance on January 16, 2015
Posted in: Uncategorized. Leave a comment 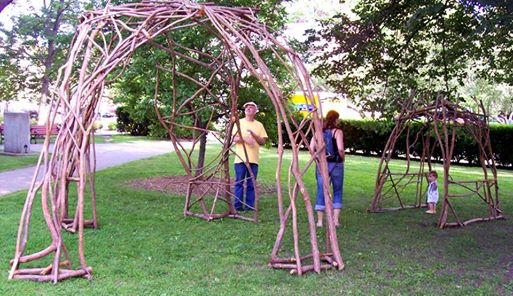 Are you looking for a true statement piece for your yard or garden, or perhaps a locally-made gift of epic proportions?

Frank Leahy, a Trumansburg-based natural wood artist and one of our 2014 Art in the Heart participants, was generous enough to donate his beautiful Ibeji Twin Arches to the Downtown Ithaca Alliance to sell to the highest bidder. All proceeds will be earmarked for the Cayuga Street Art Corridor and the 2015 Art in the Heart exhibition, so your bids will help to bring more amazing public art to our community’s urban core.

Ibeji Twin Arches, currently gracing Dewitt Park, were constructed from yew branches hand-pruned from Leahy’s property. These naturally rot-resistant branches were symbiotically attached with the sparing use of a nail gun to form two extremely strong organic archways — one scaled for children (~ 5′ W x 6′ L x 6′ h) and one for adults (~ 13′ W x 13′ L x 9′ H). They are firmly staked into the ground with 4′ rebars.

To enter a bid (no reserve, no buyer’s premium, no minimum increment), simply comment on this Facebook thread silent-auction style:

If you are unable to access this Facebook thread or wish to submit an anonymous bid, feel free to email a bid to info@downtownithaca.com. Bidding, as of January 15, is at $150.00.

Bids will be accepted until 5:00 PM on Friday, January 23. Our intrepid ambassadors will assist with the deinstallation of the piece but the winning bidder will ultimately be responsible for its removal from the park. Pickup date is flexible.

Our Own Slice of the World

Posted by downtownalliance on January 7, 2015
Posted in: Uncategorized. Leave a comment

Recently recognized by Bon Appetit magazine as one of “America’s Foodiest Towns,” downtown Ithaca boasts no fewer than 58 eateries representing a wide array of cuisines, price points, and atmospheres. Among these are seven establishments solely dedicated to serving up what has been called America’s favorite food: pizza. Whether you are looking for a plain slice or an exotic topping; a sit-down lunch or a late-night delivery; a vegan and gluten-free option or a traditional pie loaded with meat and cheese – downtown Ithaca is the place to find your perfect slice!

A six-time “Best of Ithaca” awardee, Pizza Aroma (128 South Cayuga Street) offers 47 different varieties of pizza every day, including their most popular gourmet slices of fresh mozzarella and basil; spinach and feta; and black bean and avocado. Owner Mauricio Rosa, together with his wife Dora, established the pizzeria in a former bar space in 1997 after emigrating from El Salvador. Says Rosa, “It’s nice to have a downtown location because we get customers from all over the city with the convenience of walking distance to many local businesses.”

For over 38 years, Napoli Pizza (401 East State Street) has been using the same recipes used by its founders, brothers Emilo and Leo Sposito from Lazio, Italy. Their dough is made fresh daily and their tomato sauce, sausage, and hamburger beef is all homemade. Says manager Gerry Place, whose personal favorite is their bruschetta pizza (white garlic with marinated plum tomato and red onion), “Downtown Ithaca is a unique and diverse place. With all the businesses and the two colleges nearby, we get customers from all over the world.”

Bella Pizza (171 The Commons) is a relative newcomer to the downtown Ithaca pizza scene. Located in the Center Ithaca atrium in the corner stand formerly occupied by Ned’s Pizza, Bella serves specialty New York-style slices like Philly cheese steak, barbecue chicken, and eggplant to hungry lunch crowds from Monday through Saturday. You can also order pies to go. Says owner Lingguo Meng, “We serve with great enthusiasm and our menu covers a great variety of choices. It’s a pleasant environment both inside Center Ithaca and out on the Commons.”

Bringing both pizza and the flavors of the Mediterranean to downtown Ithaca, Casablanca (111 The Commons) offers up daily specialty slices like Tex Mex, chicken Florentine, and honey barbecue. Casablanca also makes it easy to order online for delivery or pickup. Says one anonymous online reviewer, “The large pepperoni and feta pizza was truly delicious. It wasn’t at all greasy and didn’t have too much crust. The delivery was fast and they are very accommodating; if you want something that’s not on the menu, they will make it for you.”

Popular among college students and families alike, Sammy’s (215 The Commons) specializes in traditional thin-crust pizza as well as thicker Sicilian-style pizza by the slice or in thirty-slice sheets – one of the best deals in town. Their most popular specialties include chicken marsala mushroom, eggplant parmigiana, and bruschetta pizza with plum tomatoes and onions marinated in olive oil. Says one online reviewer, “Prices are low, service is quick, and they have great specialty pizzas. Plus, the huge screen in the back is nice to watch sports on while you’re waiting.”

Downtown Ithaca’s popular national chains are Domino’s (311 East Green Street) and D.P. Dough (114 West Green Street). Domino’s moved in the past year to their Gateway Commons location and specializes in delivery throughout the city. D.P. Dough, renowned for their calzones, has been a fixture next to Life’s So Sweet Chocolates and McNeil Music for many years and likewise does a large takeout business. Other downtown restaurants that are known for their delicious pizzas and pizza-inspired creations (e.g. flatbreads, bagels, and French bread subs) include Ithaca Ale House (111 North Aurora Street); Red’s Place (107 North Aurora Street); Collegetown Bagels (203 North Aurora); and Shortstop Deli (200 West Seneca Street).

Says Gary Ferguson, Executive Director of the Downtown Ithaca Alliance, “The pizzeria owners and operators of downtown Ithaca represent a number of nationalities from four continents. They truly are global entrepreneurs who have come to Ithaca to make a living and run their own businesses. They are a great example of how downtown acts as an incubator for small businesses of all types. Come downtown and experience each one of our pizza restaurants and see our own slice of the world!”